If we look at the top players in the world or even at your club they have a different mind set on the course then the average player. The average player is to worried about trouble and not to hit into trouble. The first thing they  do when they come to a hole is to see the trouble. That might be water, sand, trees or out of bounds. They bring the trouble into their mind and then tell themselves not to hit is in to the trouble.

On this hole they are so worried about the water and hitting it long enough to get it on the green.

They tell themselves “Don’t be short or Don’t hit it in the water hazard”. That’s like telling someone not to think about the Pink Elephant. The first thing that comes to mind is that Elephant. You have to think of something before you can not think of it. That means you are thinking of it. You body will then direct your thoughts towards that object. Hence you hit it where you don’t want to. 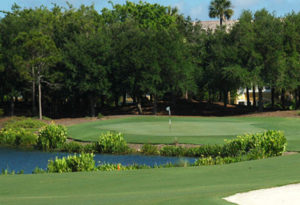 A low handicap player or a Pro sees the water and checks his distance to the hole. They then see the photo below in their mind and forget about the water. They only focus on the target and what outcome they desire. They then swing with that in mind. 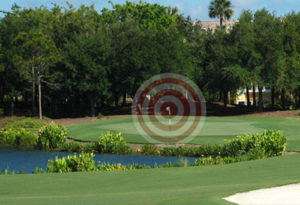 It is the same in other sports. A pitcher only looks at his target. That is the catcher’s glove. Like in the photo below. He is not thinking don’t hit the batter or don’t throw it over the catchers head. They only are focused on the target. They go through their routine then throw. 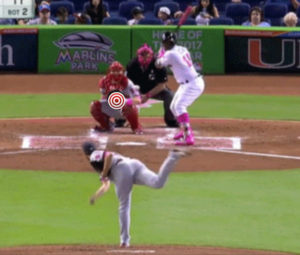 The smaller you can make your target the better. That way if you miss it it will be closer to where you wanted the ball to go. Just like the pitcher. He is not just looking at the catcher. He picks a point in the catchers glove and throws it there. Or at a point over the plate. So narrow your focus. Pick a point and forget about the trouble and swing to your target. Before you know it you will be hitting more greens and more fairways off the tee. We need to be more concerned with what we want rather then what we don’t want. That is the best way to allow your swing to be free and your mind free of thoughts.

About the Author: Bernard Sheridan